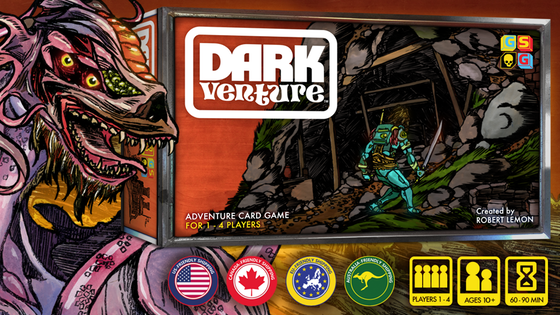 Will the game be translated into (insert language here)?

We will be translating the rules (Core/Locations/Actions) into French, Spanish and German (at least) to release online as PDFs, free to download. We will update backers as the campaign develops if the rule books will be translated into other languages (as demand arises).

How many cards are there in the game and what are their sizes?

What does 'limited retail availability' mean?

Dark Venture will have a small, limited print run. We plan on distributing to several local shops (in NY and NJ), selling the game on our website and selling it at conventions (the price and shipping will be higher). We currently have no plans for a mass release. We are focused on delivering the game to the backers of this campaign!

How do you play the solo version?

The solo version of Dark Venture was implemented early in the design of the game and has been an important focus throughout development.

In solo, you play as a single hero setting out on your own for the day. In one mode, your hero completes heroic acts attempting to get a set number of Quest Points in the course of their day (6 rounds in a short game, 12 rounds in a longer game). In an another mode of solo play, you are ranked based on the number of Quest Points earned over the course of your day (or in a quicker game, a half day).

There is one location and five actions that have been re-written for solo play because they involve multiple players. In the guides they are ‘flagged’ with an icon so that you know there is a solo entry of that location or action.

Does each hero feel different to play?

Yes! Each hero feels completely different to play. The heroes were designed to be asymmetrically balanced but have very different, unique special skills and starting items that can completely change how you play the game.

If you want to fight your way through the game, play as Bilkid, he’s very strong. In contrast, Haglor can turn invisible to flee a battle.

If you play as Paragrad the robot, he is cursed with ‘corrupt programming’ (his special skill) that instructs you to roll a die for him every turn, if 1 or 2 he must move one location away. It can be considered a free move…or it could force him to move into a location with an enemy!

As you can see, the special skills of these heroes can make a huge difference in how the game plays out!

Will there be a Print and Play pledge level? What is the lowest pledge level that offers the PnP?

The PnP is an unlocked stretch goal. We are offering it as a PDF kit, after the campaign, for download to any backer, including the $1 backers.

BackerKit is a service that crowdfunded project creators use to keep track of hundreds to tens of thousands of backers—from shipping details, pledge levels, preferences and quantities, whether they have paid or had their card declined, special notes, and everything in between!

The BackerKit software and support team is independent from the campaign’s project team—BackerKit does not handle the actual reward shipping. For more information about the preparation or delivery status of your rewards, please check the project's updates page.

How does BackerKit work?

After the campaign ends, the project creator will send you an email with a unique link to your survey. You can check out a walkthrough of the process here.

I never received my invitation. How do I complete the survey?

The most common reasons for not receiving a survey email is that you may be checking an email inbox different from the email address you used to sign up with Kickstarter, Indiegogo or Tilt Pro account, or it may be caught in your spam filter.

Confirm that the email address you are searching matches the email address tied to your Kickstarter, Indiegogo, or Tilt Pro account. If that doesn’t work, then try checking your spam, junk or promotions folders. You can also search for "backerkit” in your inbox.

To resend the survey to yourself, visit the project page and input the email address associated with your Kickstarter, Indiegogo or Tilt Pro account.

How do I update my shipping address?

When will my order be shipped, charged or locked?

That is handled directly by the project creator. BackerKit functions independently of the project itself, so we do not have control of their physical shipping timeline. If you want to check on the project’s status, we recommend reading over the project's updates page.

I completed the survey, but haven't received my rewards yet. When will they arrive?

As BackerKit does not actually handle any rewards or shipping, the best way to stay updated on the shipping timeline would be to check out the project's updates page.